'Have you ever said to yourself "I wish I could get there without the trouble of going"?'. So asks a leaflet advertising Royal Blue's new express service 'right along the Coast'.

For the owners, drivers and passengers of the fifteen vintage coaches taking part in our Royal Blue & Associated Motorways Coach Runs, it's all about the going. Our annual long-distance run is unique in recreating a bygone era of coaching as faithfully as possible. For most, the journey back in time along spectacular country and coastal roads is as much of an attraction as the destinations.

The runs stick as closely as possible to the original roads, submitting to bypasses only where essential. After months of careful research, each proposed route is driven in advance by car, inspected and interpreted in a comprehensive book of instructions and maps, issued to each coach. This year's three day run took us from Northampton to Bournemouth, along the coast to Exeter, then east along to A30 towards the Trust's Berkshire base.

'Every coach is warmed' the leaflet continues, 'with rugs to every seat'. There was no need to deploy such features this year, thanks to the carefully planned heatwave which gave rise to some spectacular sunny views of the coaches along the way, enjoyed by countless spectators across eight different counties.

In this virtual journey, we hope you'll enjoy a few sights we captured along the way. 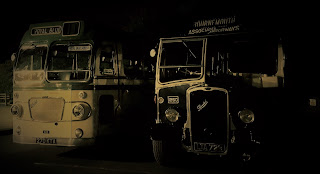 The coaches joined us from various parts of the country, including the West Midlands, Home Counties, Dorset, Devon and Cornwall. Many had a long journey to make before the run began, with an overnight stop for most in Northampton. Western National 420 and Royal Blue 1250 nap after their journeys from South Devon (224 miles) and Berkshire (52 miles) respectively.

Welcome to Sixfields Stadium, Home of the Cobblers - and, on Friday 16 June 2017, the start of our run. Representing Royal Blue in this all-Bristol line up are LL, RE and MW types, with relief cars consisting of a Hants & Dorset MW, two Crosville REs, a Wilts & Dorset L-type, and the inevitable Western National SUL - the latter not just for the cases, despite jibes! 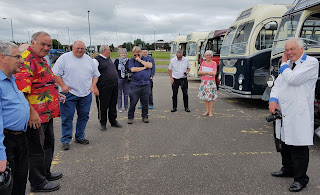 A drivers' briefing gets underway ahead of the 1030 departure. As can be seen, the run is a spirited and informal occasion, with some drivers extending the visual spectacle to their own attire and others choosing to wear a vintage uniform... 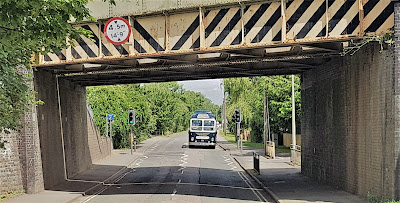 The coaches avoid travelling in close convoy to minimise inconvenience to other road users, but natural clusters do form and allow for 'on the road' shots such as these, showing (above) Royal Blue 1299 near Bicester and (below) Red & White RC968 near Abingdon. 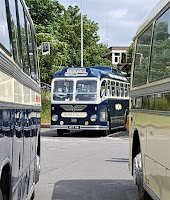 Lunch on Day 1 was taken in Newbury, where coaches parked on the site of the former Thames Valley bus station at The Wharf.

The run south took us across green and pleasant lands through Andover, into the quaint city of Winchester. Here, our Northampton to Bournemouth service coincides with the route of the London to Exmouth service whose later stages were to be recreated on Day 2 - the one described in the leaflet.

Onwards to Southampton where Friday rush hour traffic slowed our circuit of the city.

Terrain is notoriously varied on our runs. Only half an hour separates these shots of Royal Blue 1460, seen exiting the suburbs of Southampton (above) and later resting in the wilds of the New Forest with Western National 420 (below); meanwhile, Royal Blue 1250 forges on at some considerable speed... 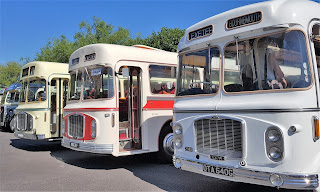 A major attraction of the runs is to witness similar vehicles working alongside one another. Here, at Bournemouth West Coach Park - journey's end for Day 1 - three of the five participating Bristol RELH coaches flaunt their stylish attributes.

Day 2 began at Bournemouth West, picking up the route 'right along the Coast' after some Saturday morning congestion had been negotiated.

In the same week the town of Wareham has been celebrating its newly reinstated railway service to Swanage, resident spectators must have been hopeful that Royal Blue might also make a return, with an incredible fifteen coaches an hour!

Now firmly into former Southern National (and later Western National, and even later, 'Southern National' again!) operating territory, the coaches were enjoyed by hundreds of beach goers as they passed along The Esplanade.

The journey then passed along the spectacular undulations of the B3157 to Bridport.

Here, the familiar bus and coach station survives in almost its original form and, aside from modern cars and camper vans (and that very futuristic white RE!), the scene is one of a busy Summer Saturday in the 1960s. The former Royal Blue refreshment stop opposite, the Cafe Royal, survives as a Domino's pizza outlet - so modern day passengers adapted accordingly!

Coaches were able to choose between two alternative routes west of Bridport, according to size and disposition. Smaller coaches were able to negotiate the 'service car' route along the Jurassic Coast via Lyme Regis, Seaton (left, alongside the former Southern National depot) and Beer, while larger coaches travelled inland. 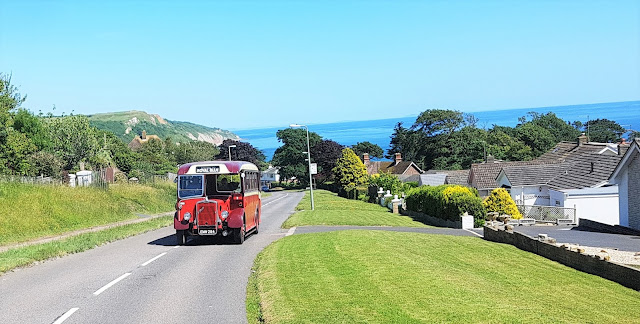 These two intrepid duplicate cars tackled the winding lanes and hills to complete the scenic route, with Wilts & Dorset 279 climbing towards Beer (above) and resting in the village (below) with Western National 420, looking characteristically pleased with its achievement.

Both routes lead coaches into, and out of, Sidmouth, creating some useful passes for photographers on the main road. There are many occasions on Royal Blue Runs when coaches pass one another travelling in opposite directions on the same road, but this time it was deliberate! Royal Blue 1250 makes a fine sight as it enters the town....

... as does the shorter L6B on its way through Budleigh Salterton, flanked by Royal Blue 1299 and its reflection. 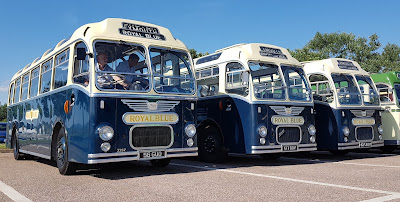 Day 2 concluded in Exmouth, where the early evening sunshine made for spectacular scenes such as this, the coming together of Royal Blue MWs 2256, 2250 and 2246.

The journey to Berkshire took us along the course of the original A30, these days substantially by-passed between Exeter and Honiton, so the quiet and scenic roads made for scenes from quite another era.

An early start from Exeter meant that coaches were away before breakfast (although some were carrying substantial provisions!), so a longer-than-scheduled* stop was made at Yeovil Bus Station for bacon sandwiches. Here, Rodger's National Express RE meets its contemporary. 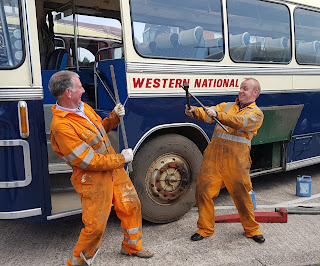 *Here, during a much longer than scheduled stay at Yeovil, we see fitters Helliker and Sheppard engaged in jubilant horseplay, having just secured Western National 1420's continued participation following a puncture. This was to be the only major issue to affect any of the fifteen coaches on a run totalling some 450 miles.

The run concluded at our Berkshire base with a party to celebrate, amongst other things, Royal Blue 1250's 45th year in preservation with TV&GWOT Chairman, Colin Billington (although there was a different number on the cake). 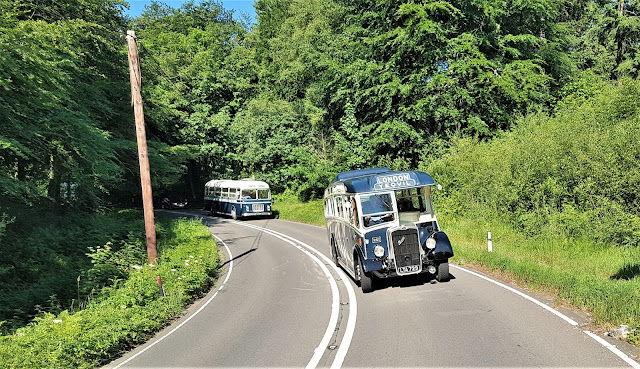 We'll therefore conclude our virtual trip with a shot of 1250 in action on its way home from another hugely successful and enjoyable Royal Blue Run. Our thanks to everybody who made it possible.