Today (27th March 2020), the last bus and coach services will leave Taunton Bus Station and from tomorrow the new bus and coach station will be distributed around the bus stops in the centre of Taunton. This is a very sad and puzzling ending to a centrally located bus station which has served the public for 68 years since it was opened in 1952.


Buses and long distance coach services had arrived and departed at this location and nearby Castle Green since 1947. The principal reasons given at the time of opening the new station in 1952 were to provide passenger facilities (enclosed, heated waiting room and information desk and displays, refreshment kiosk and toilets) and, also, in order to relieve congestion on The Parade to where many of the departures are now to return! 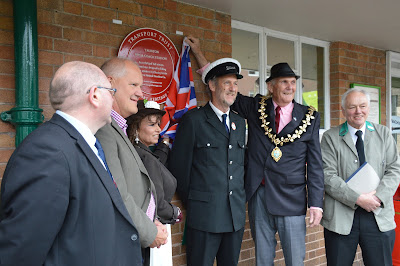 In 2015 the importance of the Bus Station and its transport heritage was marked by the unveiling of a Transport Trust Red Wheel. At the unveiling ceremony both the Mayor of Taunton and the Managing Director of First South West, owners of the Buses of Somerset brand, made much of the importance of the bus station in its provision of high quality passenger facilities and a transport hub enabling coach and bus passengers to interchange conveniently at one location.


My association with Taunton Bus Station goes back to 1958 when my family moved from Comeytrowe in the South West of Taunton to Jeffreys Way, Stonegallows, named after the infamous Judge Jeffreys who committed many to be hung at the Bloody Assizes following the defeat of the Monmouth Rebellion. The Stonegallows were situated at the top of Stonegallows Hill on the A38 between the Taunton Borough boundary and the village of Rumwell. Previously we had used Taunton town service No. 210 to travel into Taunton which did not terminate at the bus station but travelled through the centre of Taunton with several stops between the Parade and the Railway Station before heading out to Dorchester Road on the Pyrland Estate. By the time we moved I had graduated to senior school and was travelling to Wellington to school six days a week so the proximity of our new abode to the bus stop was a great improvement to the long walk I had been making from Comeytrowe to the nearest stop of the buses to Wellington on the A38 at Hicks’s Garage. Also the choice of buses was much increased with services 203 to Rockwell Green or Tonedale, 262 to Cullompton and 277 to Tiverton all virtually passing the door and, in the Summer, a constant stream of express and touring coaches from all over the country taking holiday makers to Torbay and the Cornish Riviera.


With all this activity and also the gradual decline in steam on the railways it was perhaps not surprising that my principal interest would gradually move from train spotting to bus and coach (and British Road Services) which had no alternative to the A38 in the pre-motorway era. The 203 to and fro’ Wellington was half hourly leaving Taunton on the hour and half hour but with an extra school service leaving Taunton at 8.15am. This seemed unnecessarily early to me and the 8.30 from Taunton was usually a wartime K type either 343 or 346 compared to the more mundane KSW (1825 or 1861) which was the usual steed on the homeward journey anyway. Saturdays were different as there was no school special so we were supposed to catch the 8am from Taunton. Getting up and going out in the dark was not palatable so I opted for the Saturday only 8.05 departure on the 277 to Tiverton. There were many advantages to this service which left the A38 at Three Bridges (just before Sheppy’s Cider) to meander over to Bradford-on-Tone and on to Nynehead before rejoining the A38 just outside Wellington town. It required 7’6” wide single decks, normally an early L with a post war Beadle rebody (e.g. 297, 299 or 303). The approach to the River Tone bridge at Bradford was down a steep hill always taken at the highest speed to almost take off over the humped back. Great skill was needed by the driver as the width between parapets was less than a foot wider that the bus.

My interest was really inspired by meeting Royal Blue driver George Kelley who drove his Royal Blue L type Monday-Saturday during the summer from Westward Ho! To Taunton and back, arriving at 11.12am and returning at 4pm. During his layover George had another job as a swimming instructor so I first met him when I was learning to swim. He had been working for the National since the mid-1920s and had taken his own photographs in those early days. His knowledge and experience was encyclopaedic and he opened our eyes to the extent of the National’s territory and the size and variety of the fleet. He was also involved in early preservation activities have arranged for Dennis Mace No. 668 to be saved for conversion to a mobile caravan and kept on the road for many years by the Gameson family and then the purchase of L type 262 and its transfer to the Cotswold PSV Group.


This encouraged me to start taking my own photos and some of my early attempts are somewhat bashfully revealed here. I say this because a common feature of the first roll of film was a cut-off rear caused by a bent stay on the lens of an old bellows camera which my father had dug out for me, no doubt thinking it was expendable. I soon developed a trick of pressing the bracket forwards to compensate and later attempts weren’t half bad! I quickly made a real nuisance of myself until I got a new Russian Zenith SLR for a birthday which then over many years produced thousands of photos.


Please look kindly on these early attempts which I think capture the atmosphere of the time during the late ‘50s and the Swinging ‘60s. I have continued to take photographs throughout the West Country and the Thames Valley graduating to colour slides, prints and digital SLR, returning to Taunton at least a couple of times each year to see and capture the changing transport scene. I hope you can understand my sadness and regret at the passing of Taunton Bus Station, not just out of nostalgia but a strong belief that public transport should have a greater role in both local and long distance travel, and the loss of such a facility – a true transport “hub station” interchange as stated in the Red Wheel citation.