If you came along to our 2016 Penzance Running Day, jointly organised with our pals at Cornwall Bus Preservation Society, you'll know what all the fuss is about.

The glorious scenery of West Cornwall, together with guaranteed sunshine, makes for an excellent day out in itself. Add to that 30 vintage buses, many of them native, and this is the kind of magic our visitors enjoy.

Passenger numbers were up 20% on the previous year, at 5,836 journeys. The most popular destinations were St. Ives (visited by 1,609 passengers on three different routes), followed by St Just (903 passengers) and Land's End (640 passengers). 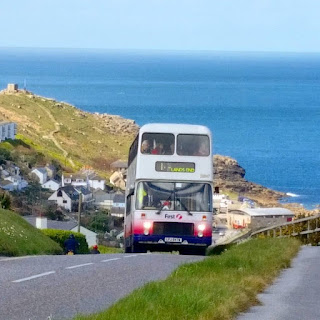 For the first time, we had 10 Bristol VR double decekers in service, the type whose retirement from service was celebrated by the inaugural Penzance event in 2006. a decade later, they were out in force, and Western National blue/cream/red-liveried 1230 carried more passengers than any other bus on the day (400).

The two native Bristol SUS single deckers, 600 and 603, proved to be the most popular vehicles by percentage utilisation (running 91% and 85% full respectively).

Despite a mechanical problem with one bus (a Bristol LH) and two buses which were unfortunately unable to attend on the day, all our timetabled services ran as planned.

Our thanks go to everybody who helped to make the day such a success for all the passengers and onlookers.

Save the day for next year: Sunday 16 April. 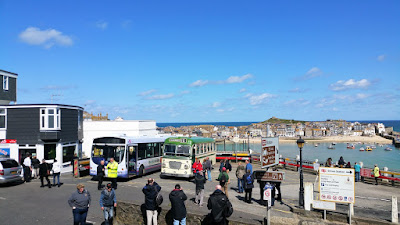