The Trust is committed to sharing vehicles with the nation, so that current and future generations may learn about our transport heritage.

Whilst our running days focus on recreating the experience of bygone bus travel, another major highlight in the calendar is our annual run for express coaches.

We've been organising the Royal Blue & Associated Motorways Coach Run since 2002, each year recreating a different express coach route from the past, reuniting survivors from the famous Royal Blue fleet and other appropriate vehicles.

Past routes have taken us all over the UK, including Penzance to Aberdeen and, last year, across the breadth of the South Coast from Kent to Cornwall; and we always call in at those unlikely little places where, would you believe, it was once possible to catch an express coach.

We stick as closely to the original roads and lanes as we can, avoiding the modern dual carriageways and motorways that have superseded them. We also try and stick to timings! Thus, drivers and passengers gain an authentic feel of what was expected of the coaches in service and how they performed - a true sense of what bygone coaching was all about.

And along the way, we collect many thousands of waves from local people who turn out to enjoy the coaches as they pass by. We prompt and harvest many memories and stories wherever we stop, from those who remember using the Royal Blue coaches for everything from holidays to courting purposes!

This year's run, in June, took us from London, through Surrey and Hampshire, 'home' to Bournemouth (birthplace of Royal Blue), through Dorset and across the Somerset levels to Bridgwater, down to Exeter, up through mid-Devon to Minehead, across Exmoor, and back down to Bridgwater. Quite an adventure for eighteen old coaches, some now well into their seventh decade.

The run is always well photographed, and there are many collections of photos online which tell the story, some of which have kindly been made available to us for use on the blog. 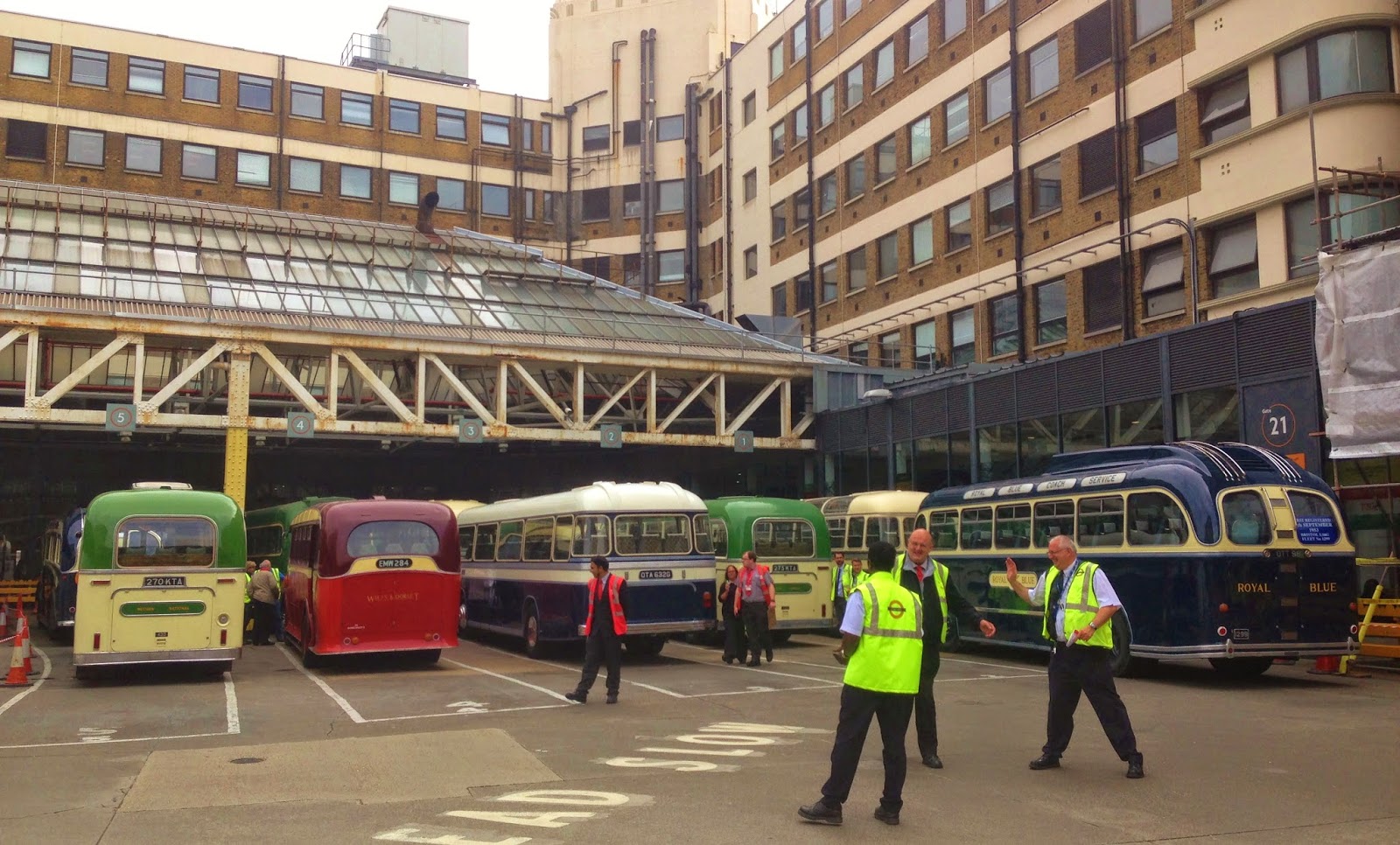 At the kind invitation of Transport for London, we were able to recreate once familiar scenes at London's Victoria Coach Station, our departure point for the run. Fleets represented on the stands alongside Royal Blue included Western and Southern National (its parent companies), Wilts & Dorset, Red & White, H.R. Richmond and Greenline: a selection to match any Summer Saturday of the 1950s and 60s.

Here, Royal Blue 2270 leads 1299 out of the iconic art-deco coach station, ready for the journey out of London via Putney Bridge and Kingston-upon-Thames, and into the green leaves of Surrey...

... where Royal Blue 1460 is seen resisting the temptation of an early refreshment stop in Farnham.

En-route to Winchester, Royal Blue 1250 - the oldest Royal Blue on the run, owned by TVaGWOT Chairman Colin Billington - shows off the elegant lines of its Duple body. 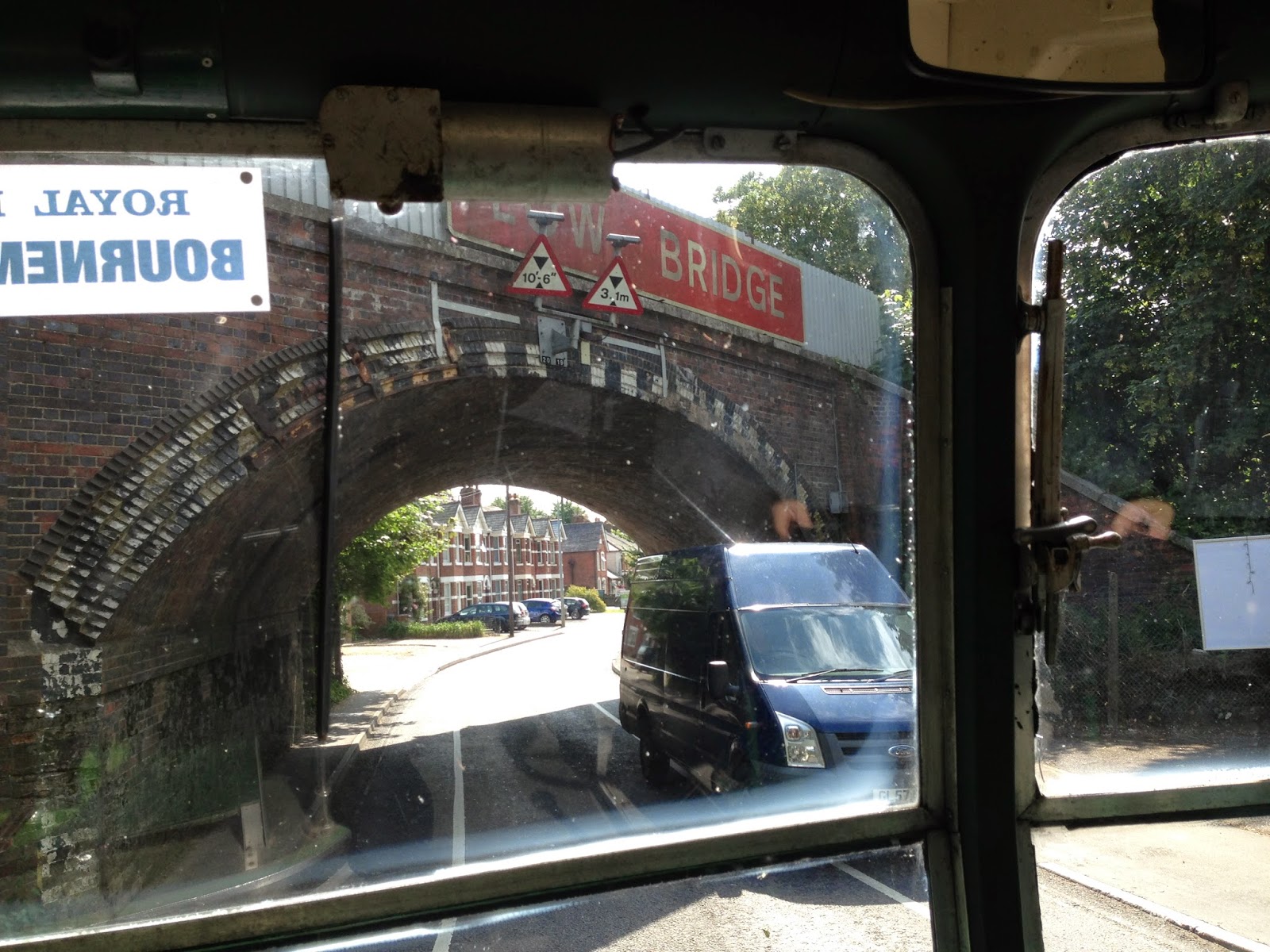 At Romsey, a low railway bridge necessitated a route variation for taller vehicles, namely the Royal Blue Bristol LS coaches with roof mounted luggage racks. Other types were able to proceed on the original route, and here we see Western National 420 - owned by TVaGWOT Trustee David Sheppard - about to make the tight squeeze. 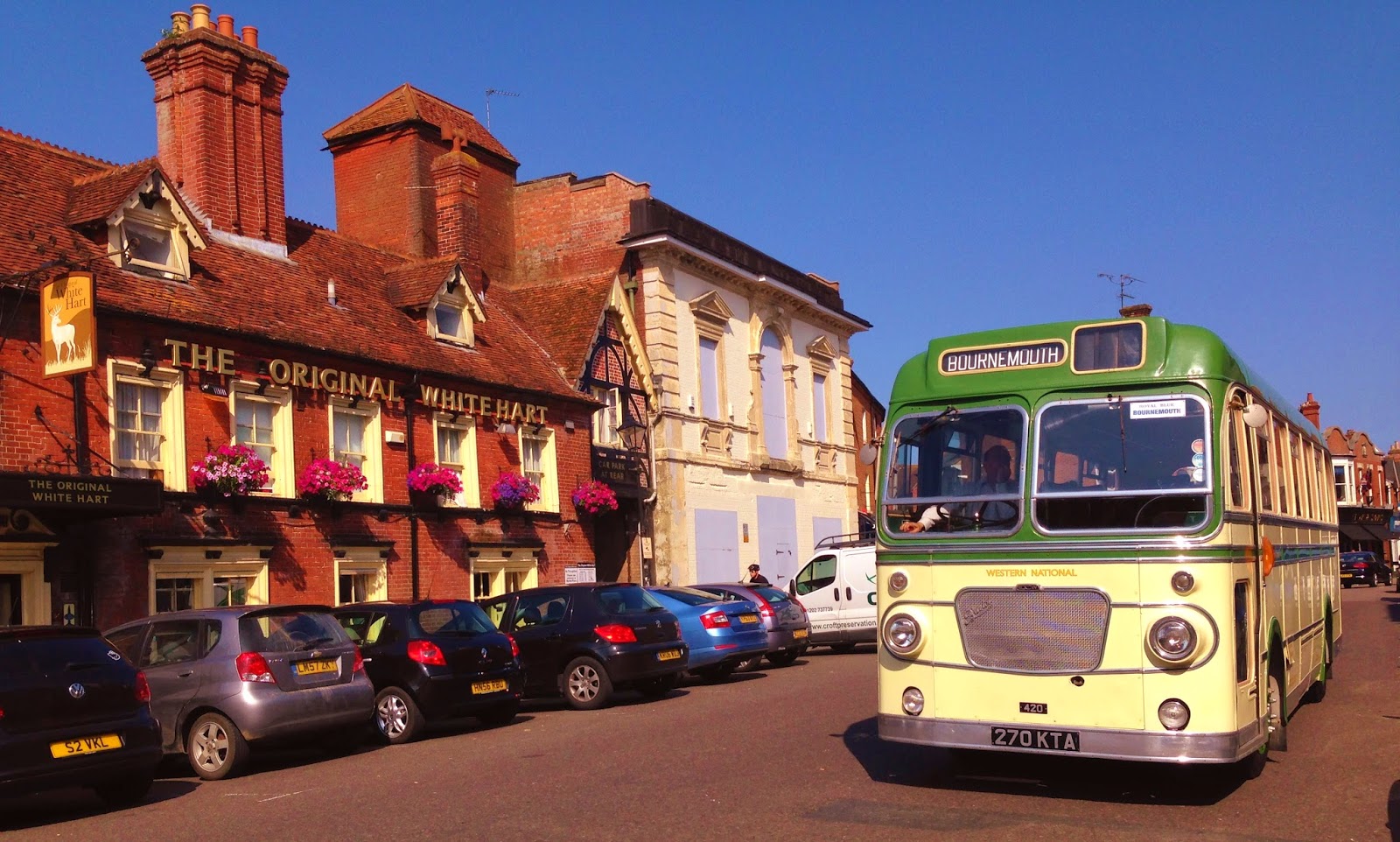 Evidently, 420 made it unscathed, as witnessed by this triumphant pose outside the former stop for Royal Blue horse-drawn vehicles in Ringwood, with Driver Rampton at the wheel. 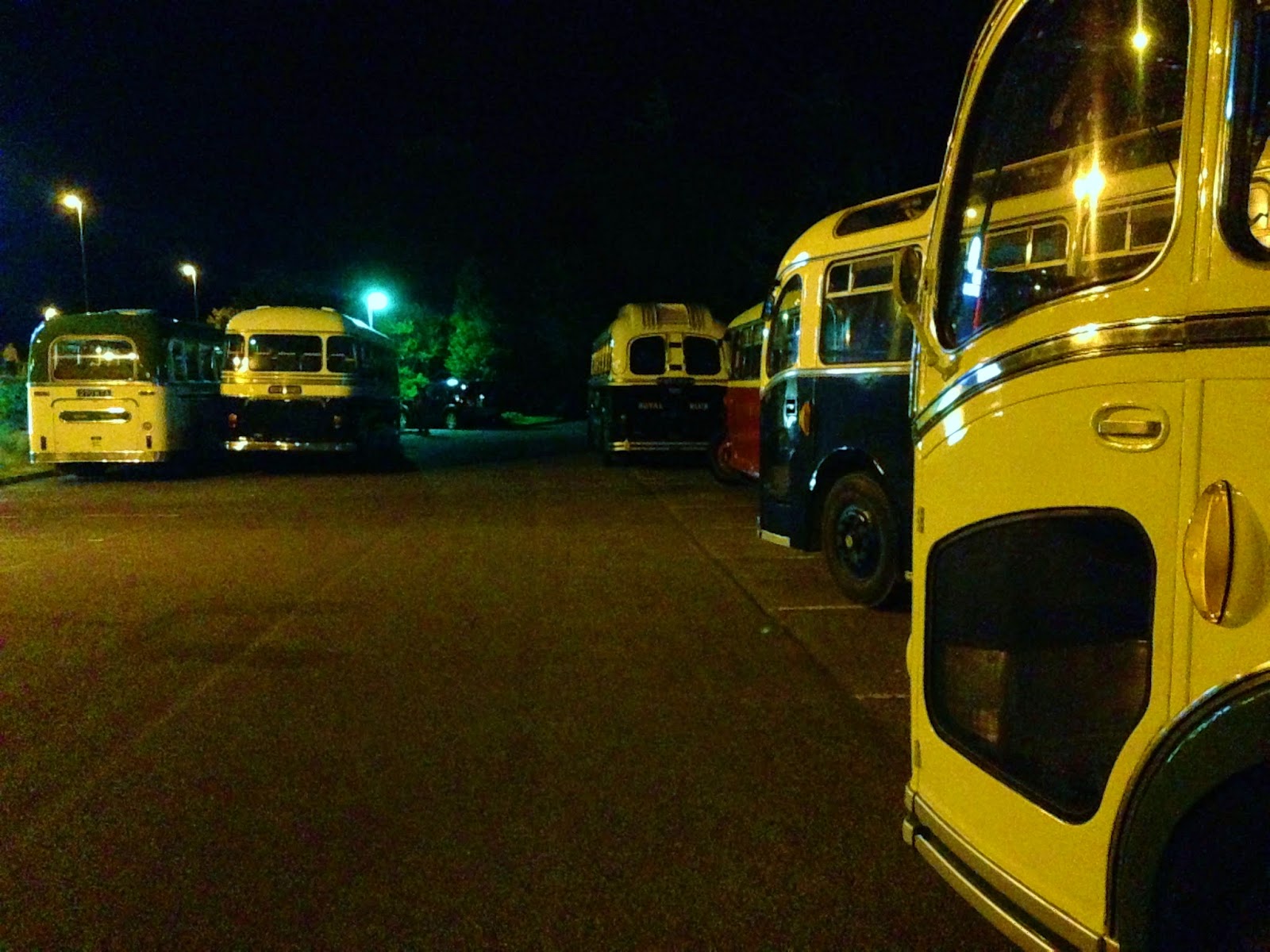 The comradery amongst drivers and passengers is a key feature of the run, and evenings are typically spent refuelling. But comradery is not exclusive to humans, as witnessed by this fine gathering in a Bournemouth hotel car park.

The following morning, coaches assemble into an impressive line-up at Bournemouth's Queen's Road coach park, the site of the former Bournemouth West station, terminus of the much lamented Somerset & Dorset Joint Railway from Bath. Drivers, passengers and well-wishers are somewhat less tidily arranged as they enjoy the spectacle.

A great highlight of the runs is the opportunity to reunite vehicles of the same type. Sisters, like Bristol MWs 2267 and 2246... 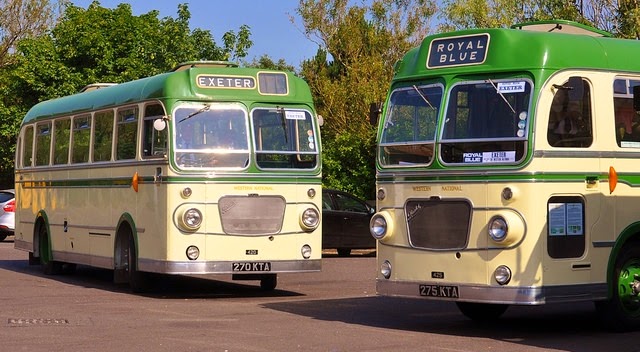 ... and Bristol SUs 420 and 425. The comparison between these vehicles is an important lesson in social history. The rise of the motor car and the foreign package holiday resulted in a decline in the market for local coach tours, meaning that many touring coaches were converted for use on stage-carriage (bus) routes. 420 (left) was converted, 425 (right) wasn't - compare and contrast...

On with the highlights:

This spectacular shot was taken alongside Wimborne Minster, and shows Red & White RC968 en-route from Bournemouth to Saturday's luncheon stop in Sherborne. Many photographers chase the coaches along to enjoy them at various locations along the run, and we're very lucky that so many have chosen to share their results this year.

Further comparisons between sisters, this time Bristol LS coaches over lunch at the Sherborne Hotel, with Southern National 1376 alongside Royal Blue 1299 and 2200. 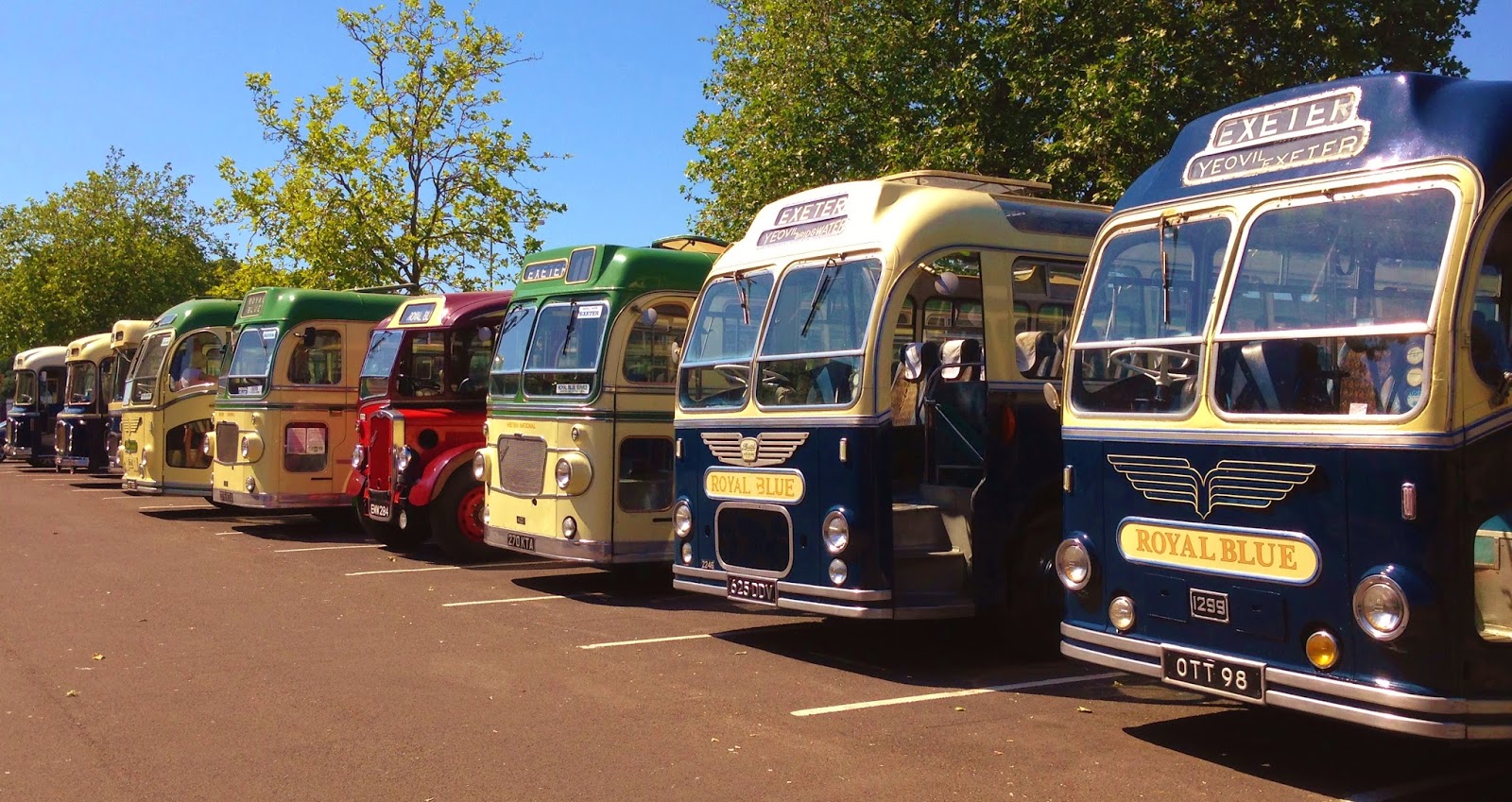 Following a spectacular journey across the Somerset levels, RE, MW, SU, L and LS types rest at Bridgwater ahead of their journey to Exeter. During this stop a former Bridgwater-based Western National driver arrived to impart stories of a once legendary coach with a reputation for breaking down. Little did he realise he was standing in front of that very coach... (identity withheld to spare the blushes of David Sheppard Jr.).

An impromptu stop outside Taunton depot - once home for many of the vehicles on the run - proved to be a memorable highlight for photographers. How many years since such a variety of coaches graced the forecourt? 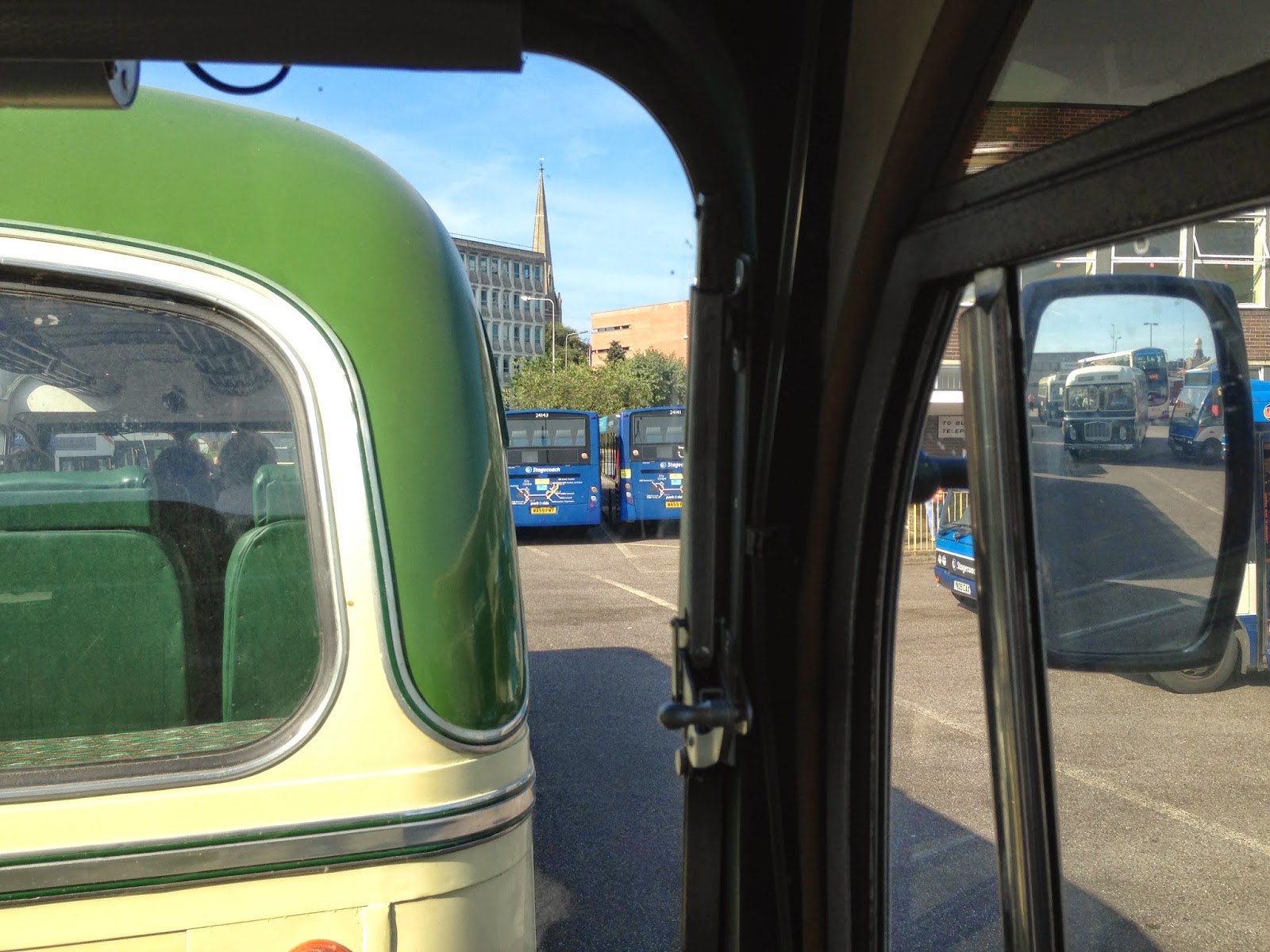 Exeter's Bus & Coach Station celebrates its 50th anniversary this month, so it was fitting that our run should visit on both the Saturday night and Sunday morning. Here, Southern National 1376 and others (in the mirror) are viewed from Western National 425, about to depart for Minehead on Sunday. 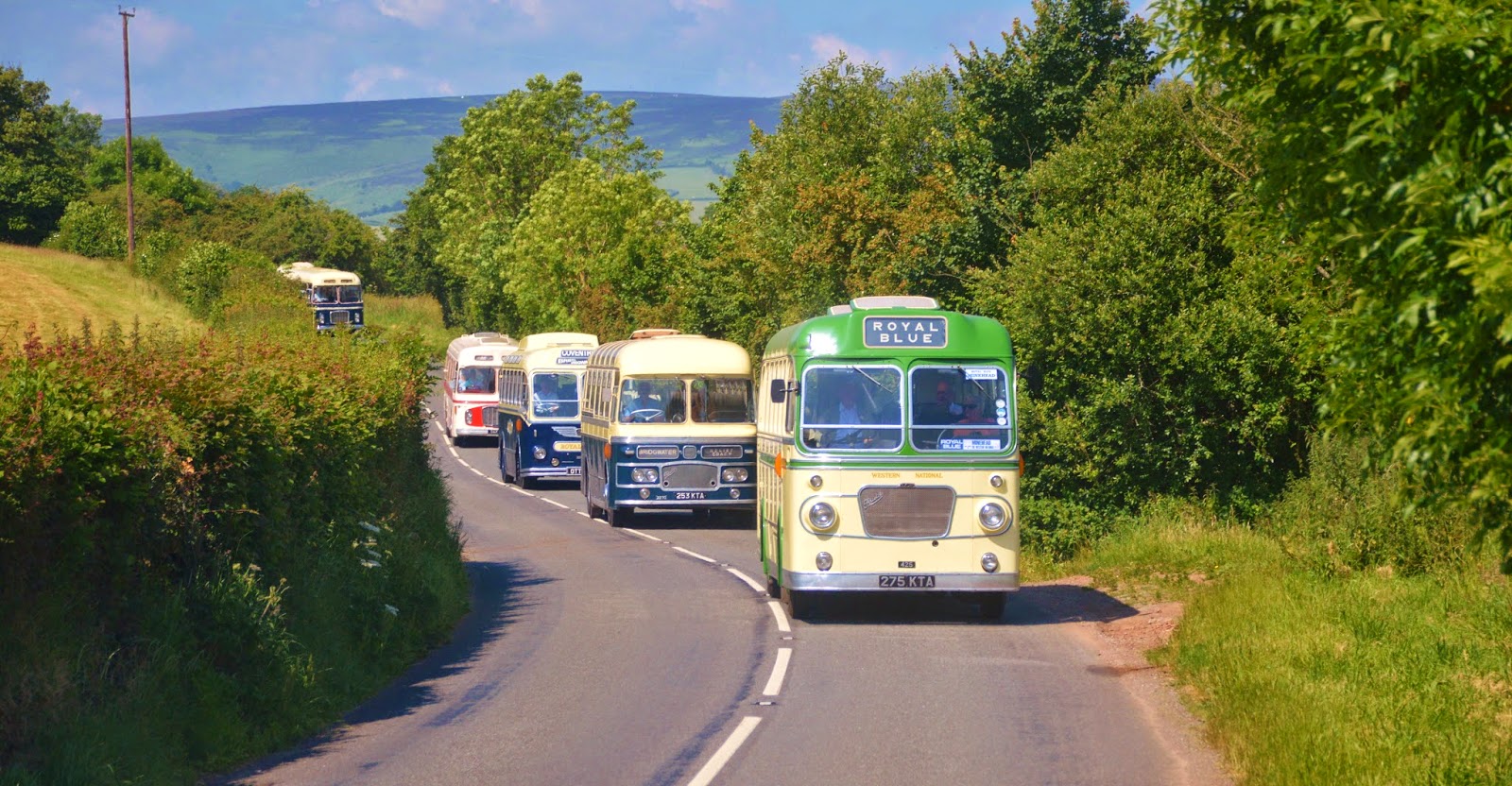 An incredible, unbroken convoy of no fewer than eight coaches was maintained for much of the journey to Minehead. The view from the back of Southern National 1376 reveals a mouth watering selection, lead by Western National 425.

From Minehead, narrow vehicles were selected to perform an Exmoor tour across some challenging terrain. Here, a pause is taken to admire the exceptional view from Dunkery Beacon before the long descent towards Porlock Weir.
Triumphant after their outward journey, Wilts & Dorset 279 and Western National 425 pause to provide scenery for those enjoying a pub lunch in the sunshine at Porlock Weir.

Meanwhile, back at Minehead, visitors to the West Somerset Railway were able to enjoy the spectacle of the wider coaches. Here, MWs 2250 and 2246 await departure with LS 1299. 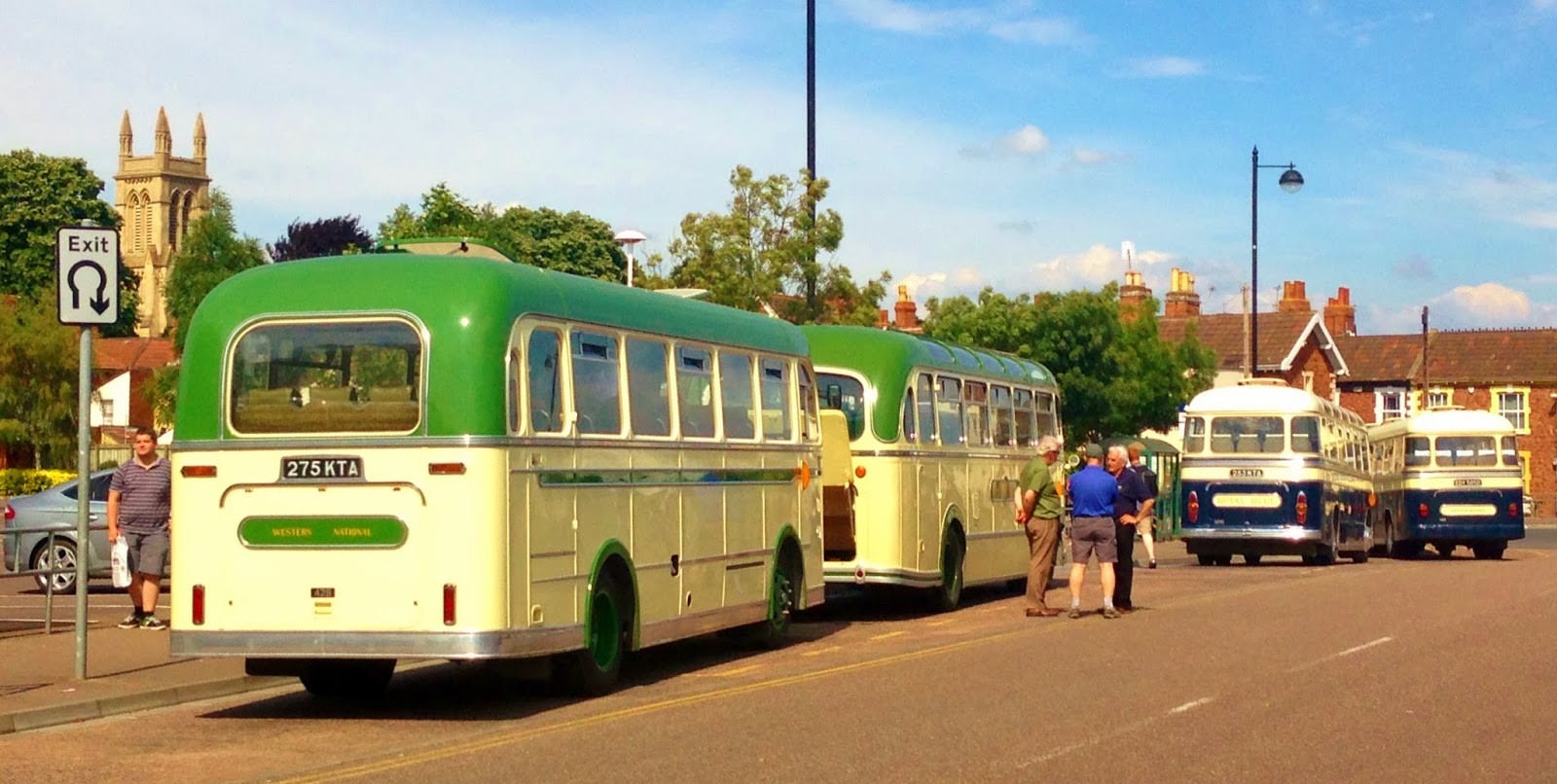 Finally, coaches assembled at the current Bridgwater Bus Station to complete the run.

Countless thousands of people were able to enjoy the vehicles as they passed through no fewer than seven counties, covering several hundred miles of town and country roads. The Trust would like to thank the owners and drivers of all the coaches which joined us for this year's run. Thanks also to the many photographers who have made their work available for others to enjoy.

We hope you've enjoyed the journey, too.
Posted by TVaGWOT Blog at 16:33 No comments: